From crtc.cs.odu.edu
Revision as of 12:13, 19 March 2019 by Angelos (talk | contribs) (Created page with "= Introduction = One of the most notable research programs associated with Old Dominion University is the Center for Real Time Computing (CRTC). The purpose of the CRTC is to...")
(diff) ← Older revision | Latest revision (diff) | Newer revision → (diff)
Jump to: navigation, search

One of the most notable research programs associated with Old Dominion University is the Center for Real Time Computing (CRTC). The purpose of the CRTC is to pioneer advancements in real-time and large-scale physics-based modeling and simulation computing utilizing quality mesh generation. Since its inception, the CRTC has explored the use of real-time computational technology in Image Guided Therapy, storm surge and beach erosion modeling, and Computational Fluid Dynamics simulations for complex Aerospace applications. The center and its distinguished personnel accomplish their objectives through rigorous theoretical research (which often involves the use of powerful computers) and dynamic collaboration with partners like Harvard Medical School and NASA Langley Research Center in US and Center for Computational Engineering Science (CCES) RWTH Aachen University in Germany and Neurosurgical Department of Huashan Hospital Shanghai Medical College, Fudan University in China. This research is mainly funded from government agencies like ational Science Foundation, National Institute of Health and NASA and philanthropic organizations like John Simon Guggenheim Foundation. 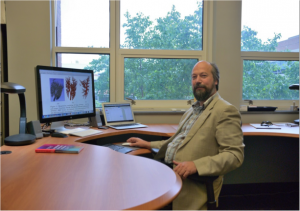 The CRTC is currently under the direction of Professor Nikos Chrisochoides, who has been the Richard T. Cheng Chair Professor at Old Dominion University since 2010. Dr. Chrisochoides’ work in parallel mesh generation and deformable registration for image guided neurosurgery has received international recognition. The algorithms and software tools that he and his colleagues developed are used in clinical studies around the world with more than 40,000 downloads. He has also received significant funding through the National Science Foundation for his innovative research in parallel mesh generation.

To further its mission of fostering research, Old Dominion University has provided the Center for Real Time Computing with lab space in its Engineering and Computational Sciences Building. The CRTC utilizes the lab space and the Department of Computer Science’s other resources to conduct its studies. The principal investigators (PIs) who lead research projects at the CRTC Lab have access to a Dell Precision T7500 workstation, featuring a Dual Six Core Intel Xeon Processor X5690 (total of 12 cores). The processor has a clock speed of 3.46GHz, a cache of 12MB, and QPI speed of 6.4GT/s. The processor also supports up to 96GB of DDR3 ECC SDRAM (6X8GB) at 1333MHz. The system is augmented by the nVIDIA Quadro 6000. With 6 GB of memory, this device provides stunning graphic capabilities. The PIs also have command of an IBM server funded from a NSF MRI award (CNS-0521381), as well as access to the Blacklight system at the Pittsburg Supercomputing Center. 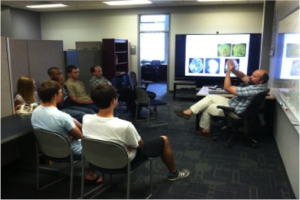 In addition to research, the lab space and resources of the CRTC may be used for outreach and education activities. Students from the local high school community have visited the lab to view its state-of-the-art equipment and discuss computer science topics with distinguished experts. To continue its outreach to the community, the CRTC will soon make its IBM server available to high school students wishing to gain experience in high performance computing. By granting controlled access of its equipment to interested high school students, the CRTC provides them with an exceptional introduction to computer science work and research, without jeopardizing other research projects. The CRTC also possesses a 3D visualization system, which it uses in its outreach/education programs. This high-quality, interactive system is especially motivating and exciting to high school students stimulated by multi-media.

The network is currently comprised of a meshed Ten Gigabit Ethernet backbone supporting voice, data and video with switched 10Gbps connections to the servers and 1Gbps connections to the desktops. Inter-building network connectivity consists of redundant fiber optic data channels yielding high-speed Gigabit connectivity, with Ten-Gigabit connectivity for key building on campus. Ongoing upgrades to Inter-building networks will result in data speeds of 10Gbps for the entire campus. ITS currently provides a variety of Internet services, including 1Gbps connection to Cox communication, 2Gbps connection to Cogent. Connections to Internet2 and Cogent are over a private DWDM regional optical network infrastructure, with redundant 10Gbps links to MARIA aggregation nodes in Ashburn, Virginia and Atlanta, Georgia. The DWDM infrastructure project named ELITE (Eastern Lightwave Internetworking Technology Enterprise) provides access not only to the commodity Internet but gateways to other national networks to include the Energy Science Network and Internet2.

The University supports research computing with parallel computing using MPI and OpenMP protocols on compute cluster architectures with shared memory and symmetric multiprocessing compute nodes. Old Dominion University has a high-performance computing cluster named Turing. Researchers have access to high memory nodes and nodes with Xeon Phi co-processors. FDR based infiniband infrastructure provides the communication path for the cluster inter communication. Mass storage is integrated in this cluster at 20Gbps and scratch space is accessible over FDR based infiniband infrastructure. Turing cluster has redundant head nodes and login nodes for increased reliability. The Turing cluster is primarily used by faculty members who are conducting research using software such as Ansys, Comsol, R, Mathematics, and Matlab among other software’s. Integrated in Turing cluster is a number of GPU nodes with NVidia Tesla M2090 GPU’s, to help facilitate computation that requires graphic processors.

Below are the specifications of the Turing cluster as of March, 2019:

More details can be found here